On Brothels and Cathedrals

Clayton County’s Bloody Run Creek is designated an “Outstanding Iowa Water” by the Iowa DNR because limestone geology and a modestly-undisturbed watershed support a clear, cold stream that is home to trout and other pollution-intolerant species. In a state with 72,000 miles of streams and 120 or so lakes and reservoirs, Bloody Run is one of only 34 water bodies we can call outstanding. 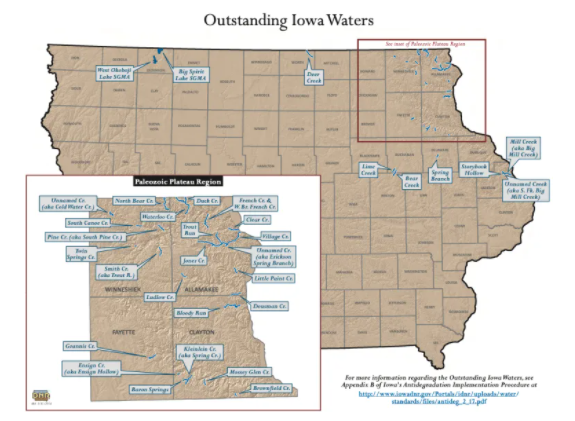 In the last 10 years, DNR has stocked more than 113,000 trout in Bloody Run (1), and brown trout are naturally reproducing in the stream. DNR figures the economic value of a trout to be about $15 (2), so if your brain is angling to total that up, the public has invested about $1.7 million just in fish for this stream.

All things considered, a person might expect that our government would tenaciously protect, and our industries would respect, Bloody Run Creek and the other 33 “outstanding” waters, since there is only one for every 320,000 Iowans. Yes, a reasonable person could expect that.

In 2017, a company identified as Walz Energy began construction on a ~10,000 head cattle feedlot near Monona in the Bloody Run watershed. Cattle are big eating machines, and as such they produce a lot of waste, about 14 times as much as a human being when considering the nutrient and solids content of that waste. Even under the most ideal circumstances and weather conditions, it would be a colossal challenge to reconcile this operation with maintaining Bloody Run in its present condition. The creek’s watershed is less than half the size of the city of Des Moines, where of course the human waste is processed and treated in a wastewater treatment plant.

In the case of Walz Energy, the original intention was to anaerobically digest the manure and then capture and sell the natural gas generated by the process. Now I will say that this is not a terrible idea if you’re trying to manage a lot of manure, and as coincidence would have it, some years back I edited a textbook (3) on this subject.

Unfortunately, the Walz Energy operation was a Bloody mess from the beginning and a failure to control erosion during construction resulted in muddy runoff and two $10,000 fines from DNR. DNR staff requested the case be transferred to the Attorney General’s office where fines can be much more punitive—up to $5,000 per day. But Walz made a pledge to the Jumbo Shrimp Commission in July 2018 to fix the problems (4), and the commission declined to let the Attorney General take over. Wait a minute, what was I thinking, I meant the governor-appointed Environmental Protection Commission, which provides oversight for DNR’s environmental protection efforts. Sorry for being such a (oxy)moron.

As it turns out, there were two parties in this deal. One side of beef was comprised of some energy guys and on the other side were some cattle guys, the Walzes.  The energy guys apparently ran out of money before the $15 million digesters could get built (5). Maybe they had some negative income (no more oxymorons, I promise). Or maybe those DNR fines were the straw that broke the camel’s back, but 20 grand seems like chump change next to the $25 million that this idea was going to cost.

Anyway, the cattle guys saw red because supposedly they’re out $10 million and so they filed a lawsuit late last year against the energy guys and blah blah blah rich guy problems. With cattlemen being what they are, however, they would still like to raise some cattle in the feedlots and accompanying six barns that have been built, and that brings us to the here and now.

Without a digester, that manure has to go somewhere and that somewhere is crop ground. Remember that the Bloody Run watershed is less than half the size of the city of Des Moines. The operation, now called Supreme Beef, has submitted a proposed Nutrient Management Plan (NMP) to DNR for an 11,500-head cattle operation that will generate 30.5 million gallons of manure per year, and that manure will contain 1.2 million pounds of nitrogen (N) and 762,000 pounds of phosphorus (P).

To get rid of the manure, they will apply 269 lbs of N per acre of corn grown in consecutive years to land that they say will produce 224 bushels per acre of grain. I don’t know if all the receiving fields are in Clayton County, but the average corn yield there the last five years has been 203 bu/ac, which would presumably require less N than 224 bu/ac corn. The bigger your expected yield, the more manure N you are allowed to apply.

Side Note: Almost every NMP I have ever seen, and I’ve seen a few, projects corn yields above the county average. Coincidence? To paraphrase Garrison Keillor, maybe Iowa is the place where all the farmers are good-looking and all the corn yields are above average. Who knows.

Using Iowa State University’s N rate calculator (6), I get a recommended continuous corn application rate of 240 lbs/acre (29 lbs/ac less than the proposed) when I put in $3.25 per bushel for the price of corn and $0 for the fertilizer cost, since they are getting free manure from their own cows.

On the phosphorus (P) side, many of the proposed fields have already tested in the “Very High” category, meaning that the crop would not need any added P. However, because you can’t take P out of PooP, the fields are still going to get a heavy dose—41 pounds per acre, even though recommendations for continuous corn in this very high soil P condition would be zero pounds per acre (7).

I might also say that this operation lies within the most environmentally sensitive part of Iowa, where the groundwater is already nitrate-contaminated (8) because many of the fields are like those in this NMP—20 to 30 inches of soil atop porous bedrock that it is a sieve that  water-borne contaminants travel through to aquifers and limestone streams like Bloody Run. Adding insult to insult, one of the fields is bordered by 11 mapped sinkholes which rapidly convey surface contaminants to aquifers.

If you’re among the unwashed in such matters, what I just described may sound preposterous. Why would our laws and our government and one of our industries even consider something this atrocious? The truth is, what I just described repeats itself month after month, year after year, legally, all over Iowa, because of the way our laws governing livestock production are structured. This is one reason why our water, yours and mine, is polluted.

Are we not allowed to have even 34 “outstanding” waters? Apparently not. If agriculture is willing to take Bloody Run, rest assured they will take the other 33. And this should not surprise you, coming from an industry that is openly contemptuous of the state’s largest city for wanting clean drinking water.

From where I sit, the industry doesn’t even blush anymore when making a grab for our land and water. Where are the organizations (both on the ag and environmental sides) that purport to be advocates of clean water? Are they ok with this? Where is the outrage? Or are they so concerned about self-preservation that they will sacrifice a Bloody Run? I think they are. I know they are. Our pollution problems have enabled more than a few to live a secure and comfortable life.

To be honest, and I mean this, I have to hand it to them on the Ag side—they have done a fantastic job of guarding their brothels. But who is guarding the public’s cathedrals?