“To be radical is to simply grasp the root of the problem. And the root is us.”

There’s a page on my website where I post the PowerPoint slides from presentations I conduct. I took a look at that page this morning, and over the last five years, I have conducted 69 programs for various groups, or about one a month on average. I reckon that at about half of these I get the question, “what can be done,” this in regard to Iowa water quality and pollution generated by the corn-soybean-CAFO production model.

People have been thinking about “what can be done” for a long time. Because of industry and farmer recalcitrance and hostility toward regulation, various ideas for improving water quality have focused on either (1) enticing farmers to voluntarily adopt practices that reduce erosion and nutrient loss without major modifications to the production system or (2), promotion of concepts like increased crop diversity and improved soil health that do require substantial management changes. I suppose you could also throw land retirement in there, but this has not been tried on any significant scale in Iowa since the 1980s.

The public has long been expected to be a financial participant in category (1) solutions, and Iowa’s nutrient reduction strategy is aligned with this cost-share concept. It’s also been apparent for a while now that momentum is building to ask the public to financially support category (2) solutions, and in fact this has already happened with public dollars used for cover crops, which are unharvested plants that help retain water and nutrients and enhance desirable soil qualities, thereby reducing water pollution.

This momentum seems to have gained steam since the election with the category (2) concept being repackaged (yet again) as regenerative agriculture. Regenerative agriculture focuses on building (or rebuilding) soil organic matter to improve water and nutrient cycling, reduce erosion, increase biodiversity, and sequester greenhouse gases. You can think of soil organic matter as the waste of live stuff and the remains of dead stuff, along with some fungi and other microscopic beasties that live in the soil. Various modern farming practices, especially tillage, tend to reduce organic matter and degrade that which remains.

The idea of regenerative agriculture in its several nomenclatures has been floated many times over the past 80-90 years or so, and has been embraced with varying degrees of seriousness. But the concept has never had widespread buoyancy in corn belt agriculture beyond a modest turn to port on tillage, that is, less mold-board plow (overturning the soil on top of itself) and more “conservation” tillage (disking and chiseling, primarily), something that was tugged along by conservation compliance in the 1985 Farm Bill. In Iowa, about 21% of the crop land is still in conventional tillage, 34% no-till, and 42% in reduced or “conservation” tillage (1). Tillage is seen by many farmers as more necessary for corn than soybean. Cover crops are used on about 4% of Iowa’s cropland, according the latest Iowa Nutrient Strategy progress report (2).

With the incoming Biden administration apparently serious about climate change, many in the NGO, foundation and academic world are excited about the prospect of the federal treasury’s barn door being flung open to help proselytize for regenerative agriculture. Born-again farmers would be paid to implement regenerative agriculture practices that will lay carbon to rest in their soils, instead of having it marauding around the atmosphere, melting polar ice caps and energizing super storms. And presumably this will improve water quality for the reasons stated earlier. This all is what we call “monetizing ecosystem services” in the biz, because apparently the intrinsic value of healthy soil, reduced erosion, and cleaner water is so low to the farmer that they won’t do it unless we pay them to do it.

Now permit me to say now that I am all for regenerative agriculture and I have stated so in this space, albeit without using the specific term. But there is a whiff of something moldy hovering over this. Even the optimists know these types of approaches will likely take generations to deliver the water quality we want. But, I can tell you there is a feeling of futility about Iowa water quality—4% of the land in cover crops after eight years of the Iowa Nutrient Reduction Strategy is a kick in the crotch, let’s just be honest. So, we’re going to give mouth-to-mouth to the constipated Soil Health movement of the last decade and rebrand the resulting Lazarus as Regenerative Agriculture. It’ll probably be worth at least another 4-8 years of relevance for a lot folks, relevance being the real long-term goal here and one of the reasons our water still stinks.

Again, to emphasize—I’m down with regenerative agriculture or whatever fancy ornamental names you want to hang on this tree. But for crying out loud, shouldn’t we be asking agriculture to perform at some baseline level of environmental performance before brainstorming yet another unaccountable way to funnel your money to them for uncertain outcomes? These are folks that brag about the size of their bulging federal largesse while the rest of the country tries to recover from the worst crisis in a century (see below). The public has been asked to invest over and over and over again in this production system; isn’t it about time we had a say in how it is operated? 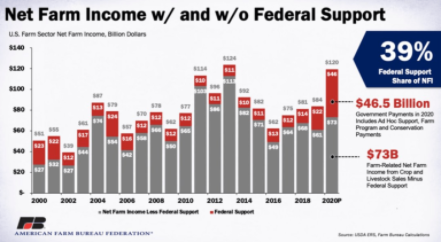 There are things we can do now that would improve water quality now. But many of us need to could quit worrying about our relevance for five minutes and have the courage to state the obvious. What follows is the answer I give when asked “What Can Be Done.” At least three of the five points I make are universally acknowledged throughout the industry to be bad practices. All five of them are things that allow the existing production system to remain largely intact, with or without soil health, regenerative agriculture, or whatever you want to call it. The reason we don’t do these things isn’t because they won’t work, it’s because there are a lot of cowards when it comes to Iowa water quality.

Well, there you have it. Nothing on that list should cost you, the taxpayer, a dime. But I will tell you, if you want clean water, you will have to demand it.

If you don’t know, Howard Zinn (quote at the beginning) managed to write at once what might be the most admired and the most hated book about America (the latter almost certainly is true): A People’s History of the United States. If Zinn was right, true change in America comes from below and progress only happens when people resist and organize. If you’re waiting for the water quality elites here in Iowa (and you can put me in that group if you want to) to solve the water quality problem, you’re going to wait a while. Sorry. The industry will pollute your water for as long and to the degree that you let it.