I posted an essay in May describing a Water Quality Index (WQI) I developed about five years ago for Iowa DNR with Rick Langel of the Iowa Geological Survey. To summarize, we developed a single-value metric of water quality for Iowa streams based on a formula developed by the province of Alberta and Iowa water quality measurements for dissolved oxygen (DO), E. coli bacteria (EC), total nitrogen (N; nitrate + nitrate + ammonia + organic nitrogen), total phosphorus (P) and turbidity (TURB; clarity).

Since then, I've done further analysis of these data as I'm trying to work this into a journal article to submit for review, and I'm writing this second piece to 1) help me organize my thoughts, and 2) because I think this evaluation will be interesting for general audiences.

I've aggregated water quality data for 44 Iowa stream sites from DNR's website. (In the previous post, I included the Iowa River at Wapello; I left it out of this time because the historical data was too sparse.) Most of this data goes back to 2000, plus or minus a couple of years, depending on the site. I also looked at groups of sites. These groups I list below along with my rationale for clustering the streams the way that I did.

In my experience, people want to know what stream water quality is now, and whether it's getting better or worse. Communicating these things can be complicated, because you need lots of data collected over a long time to make sweeping conclusions. And statements about trends are always risky because things can change fast in a radically-altered landscape like Iowa. What I did here is to say the last five years (2016-2020) is "now", and then I compared that period with the pre-2016 data to construct statements about trends.

I also wanted to know which of the five measured parameters is driving changes in the WQI at the various sites. So I included that 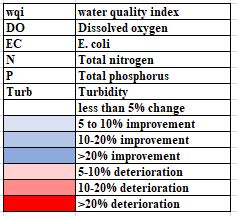 information, along with the WQI values in the table below. Red is getting worse, blue is getting better, white is not changing very much. I should emphasize that average values for the five parameters do not drive the WQI value. Rather, the WQI is based on whether a set threshold is exceeded, and by how much. Please refer to the earlier blog post for more details.

I'm not sure how the big table will look on your phone if you're accustomed to reading these posts there. Here is a link to the table if you want to look at it in a separate window.

Narrative continues below the table. 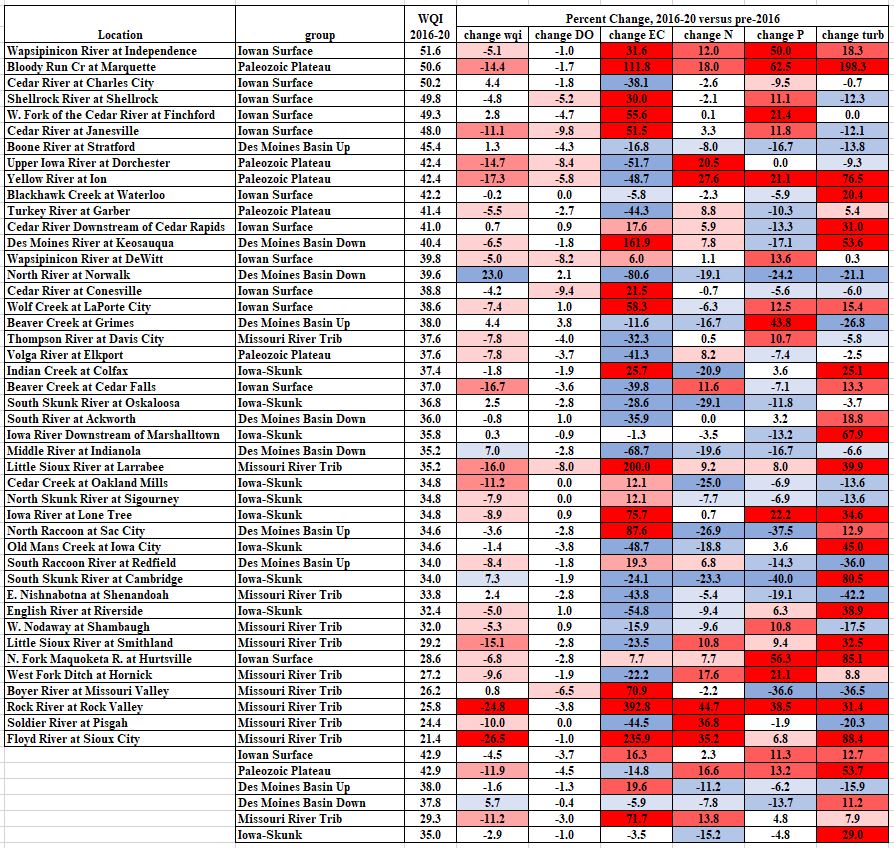 Here are some of my conclusions:

Water quality in our streams and lakes will not improve until the public demands it.