People tell me I too frequently use the word "insanity", but I reckon that is like telling a farmer he uses the word “money” too much. As the old saying goes, write what you know, and I think I know crazy when I see it. So I'm not inclined to change my schtick.

Speaking of "money", some guy named Kevin Cone posted a video on his twitter feed last week that caught my eye. I don’t know the fellow, but his twitter bio says he is an “Auctioneer-Iowa Auction Group, NW Iowa Farmer, Coach, Ordained Minister, Former World Champion Horseshoe Pitcher”, or in other words, pretty much your average Twitter user. For the record, I like pitching leaners and ringers about as much as I like pitching sarcasm, but none of my relationship partners could warm up to the idea of a horseshoe pit in the back yard. So what are you going do. Choose your spouse wisely, I guess. At any rate, at least part of this guy’s schtick is auctioning Iowa farmland.

The video in question features two long rows of rust-free pickups, most of MFP-era vintage (in other words, brand new) sitting atop 127 pancake-flat acres of earth’s best farmland on Iowa’s Des Moines Lobe. The horseshoe stud tweeted that the land sold for $18,500/acre, or $2.35 million in total, coincidentally the approximate value of the 50 or so pickups sitting there. Karma, baby. Remember that, if you’re planning to sell some land. 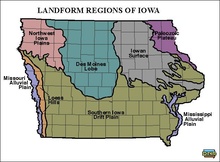 We hear often that a lot of young Iowans want to farm, but can’t, and you can see why. They can’t afford the land. Iowa farming these days is for rich people. According to ISU (1), the average net farm income last year was $134,119. Total farm assets average $2.52 million and average farm net worth is $1.80 million. For reference, the average Iowan makes $49,280 per year (2). Those rich city-slickers that Chuck Grassley likes to slime make an average of about $55,000/year in Iowa.

Establishment agriculture’s response to the scarcity of land for aspiring farmers has been to make it more difficult for land to be donated for use by the public (3). And our very own Department of Natural Resources rents 29,000 acres of your public land for farming. Iowa ranks 47th out of 50 states in percentage of land that is public, and a large proportion of ours, maybe about half, is in road easements. We have less public land than New Hampshire, Hawaii, and New Jersey combined.

When it comes to land prices, here is something that doesn’t get talked about much: not holding agriculture accountable for their water pollution almost certainly inflates land values, which of course restricts opportunities for aspiring farmers. Let’s say we did something completely insane and regulated pollution leaving the farm in ways that made farmers and/or agribusiness financially responsible for its mitigation, pretty much what we do for every other business in the U.S. It doesn’t take a genius to figure out that the value of the factory, which in this case is the land, would take a hit.

Except we don’t do that. We do quite the opposite. We ask the average Iowan, making 41% of the money made by the average farmer and with a fraction of the net worth, to pay farmers to stop polluting, and don’t hold them accountable when the desired outcome goes unmet.

People in the conservation world wring their hands about rented farmland—i.e., how can we ask farmers to be accountable for the pollution leaving land they don't own? This indeed is a good and an important question. Most reports on this show more than half of Iowa land is farmed by someone other than the owner and many of these people (>34%) HAVE NEVER FARMED (4). On average they rent out about 130 acres, which in Iowa means they are millionaires. The idle rich. The people at least partly responsible for polluting the public’s water. At least some of them living it up at the one place in Iowa you *can* find clean water, West Lake Okoboji, during the summer.

So I get that Iowans don’t want to put a regulatory burden on 75-year-old Uncle Harold, still farming the home section up in Calhoun County after all these years. Believe me, I get that. But for the love of God, why do we let these rich landlords off the hook? Why do our legislators condone this?

Here’s an insane idea: require Iowa farm landlords to have cover crops on all their land. Limit fertilizer use to ISU recommendations. Ban new tile installation on the ground.

Novel idea, you say? Well, the Clean Water Act requires me (and probably you, if you own property in a city with a population greater than 10,000), to pay for stormwater mitigation related to your property. For me, it's $375 per acre per year.

And people say I'm the crazy one.